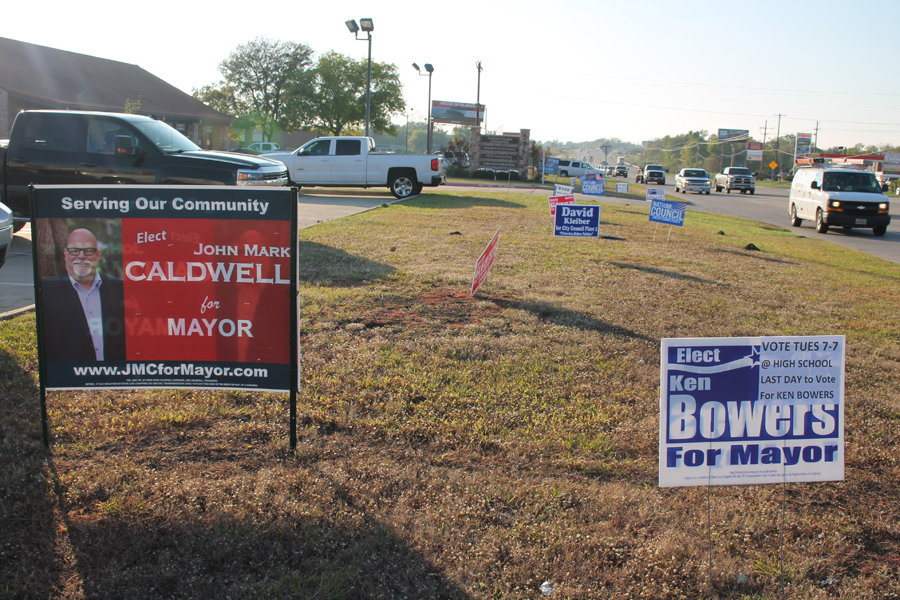 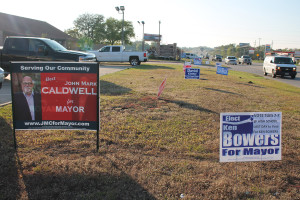 A collection of political signs sprouted near Princeton City Hall in the weeks leading up to the municipal elections. However, out of the 3,862 registered Princeton voters, only 12 percent cast ballots.

The unofficial tally was close, however, with Caldwell receiving 226 votes (51.25 percent) to 215 (48.75 percent,) votes cast for Bowers. The outcome does not become official until votes are canvassed, which is set for the Nov. 9 city council meeting.

“I would like to thank the voters, every single one, who supported me and put their faith in me. I am excited about the future of our city and the challenges that lie ahead,” Caldwell said. “I am honored to serve with such a great staff and council and am looking forward to my new role. 48 years ago my dad served as mayor of Princeton. Today, it’s an honor to be elected as your new mayor. Thank you again for your support.”

Voter turnout was light, just 12 percent of the 3,862 registered voters in Princeton made it to the polls for the municipal election.

Caldwell has been serving his first term in Place 3 on the council, the same council position that his father, J.M. Caldwell, filled more than 40 years ago. Also as his father did, Caldwell moved up from the council to the mayor’s office.

Bowers can ask for a recount because the margin of difference between his and Caldwell’s vote totals are less than 10 percent of the number of votes received by Caldwell.

Also filled in balloting this week was the unexpired portion of Place 4 on the council. Seeking the office were Nathan Council and Mike Guillen, with Council winning the office by a 176-170 margin.

“First of all, I would like to express my deep appreciation for the honor to service our city in this capacity. I look forward to working with our city officials and each and every citizen to make our community the best it can be,” Council said. “It is truly an exciting time of growth and I am honored to be a part of this city. Thank you again for the vote of confidence.”

Caldwell campaigned in part on the platform that, if elected, he would serve as a full-time mayor. The new mayor is retired.

Both mayoral candidates cited growth as the primary issue facing Princeton in the future. A recent presentation made at a city council member predicted that the community’s population will triple in a few years.

In other election action, statewide voters overwhelmingly approved seven proposed amendments to the Texas Constitution. Those amendments are:

•Proposition 2 extends a property tax exemption to the surviving spouse of a totally disabled veteran who died before 2010.

•Proposition 6 includes in the Constitution the right to hunt and fish.

•Proposition 7 diverts $2.5 billion or more of sales tax revenue from the General Fund to the State Highway Fund.