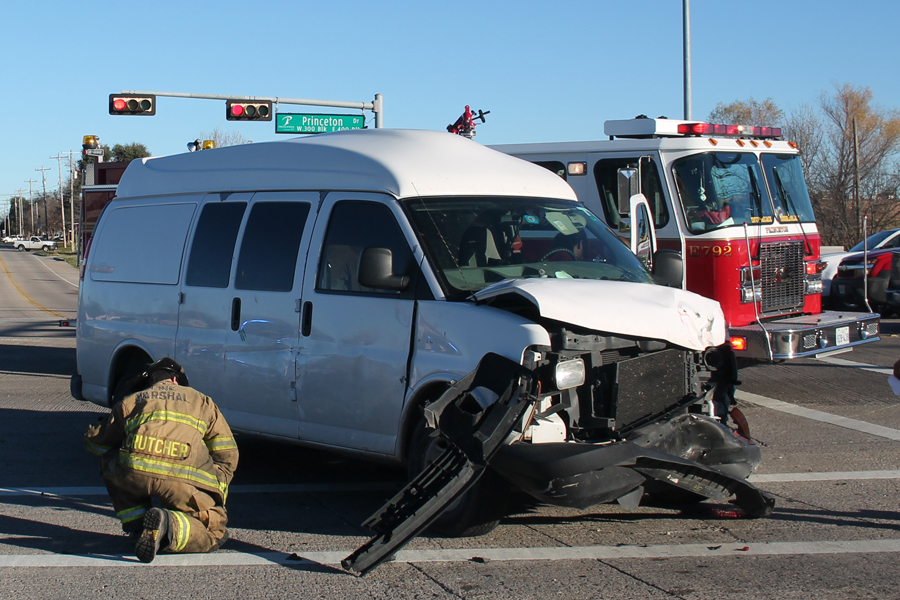 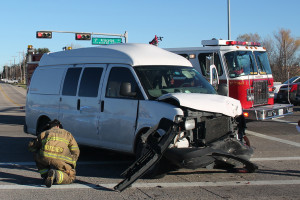 Princeton Police are investigating factors that led to a crash Monday, Dec. 14, between a city firetruck and a passenger van at the intersection of Hwy. 380 and Fourth Street.

The accident occurred as firefighters in a rescue truck were responding to an emergency, running with lights and siren.

Police Chief James Waters reports that the firetruck was southbound on Fourth Street and its driver observed the van which was eastbound on Hwy. 380. When it appeared that the two vehicles could collide, Waters said, the firetruck driver sped up to avoid striking the van in the area where passengers were sitting. As a result, the van hit the back side of the firetruck.

The driver of the van was cited for not having a driver’s license.

Waters pointed out that while it is the responsibility of first responders to make sure they operate safely, it is everyone’s responsibility to pay attention to their surroundings. The chief offers some guidelines on what to do when you observe an emergency vehicle approaching.

The one thing to remember: right-of-way. This likely goes without saying, but emergency vehicles trump all others when it comes to right-of-way. When the siren is blaring and the lights are flashing, green lights, yield signs, and carefully rehearsed roundabout etiquette take a back seat to any police car, fire truck, or ambulance.

When the siren approaches from behind you, the first thing to do is slow down and check on the traffic around you. Avoid the instinct to pull over immediately — there could be another car, a cyclist, or a pedestrian in harm’s way.

Once you spot a clear path to the shoulder, flip on your blinker or your hazard lights and make your way over to the right. Wait to make sure the coast is clear before you pull back into traffic.When the siren approaches from the front, it can be tricky to know what to do when an emergency response vehicle approaches. In general, you still want to pull to the side of the road and flip your hazards on.

Another good reason to pull over is that police cars, fire trucks, and ambulances will sometimes drive on the wrong side of the road if the traffic is too dense in their lanes. Pulling onto the shoulder essentially frees your lane for the emergency responders.

When it isn’t possible to move over, slow down to a safe speed and pass with a whole lot of caution. Other drivers will take your lead, and together you’ll reduce the risk of a tragic accident.

Most states have official move-over laws in place. In Texas, a driver needs to change lanes or slow to 20 mph below the speed limit when approaching a stopped emergency vehicle. If the speed limit is 25 or below, drivers need to slow down to 5 mph. The state may fine offending drivers up to $200 (or more if property damage or injury results from the violation

When following any emergency vehicle with flashing lights you’re generally expected to stay about 300–500 feet behind it. Some states have a law stating minimum following distance. It’s always dangerous to tailgate an emergency vehicle.

An emergency responder’s job is not an easy one. We can help by understanding the official and unspoken rules of the road — slow down, pull over when it’s safe, and stay alert.

Understanding how to share the road with ambulances, police cars, and fire trucks adds one more safe-driving feather to your cap.