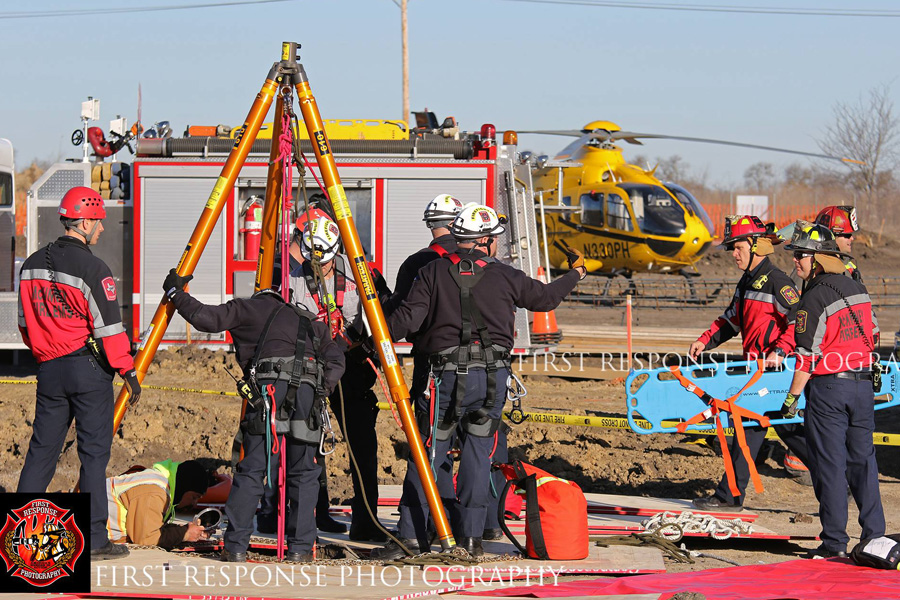 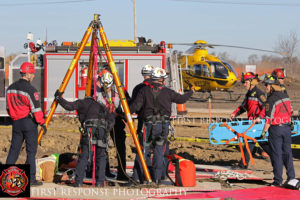 Firefighters from Princeton, McKinney and Frisco complete a low angle rope rescue to retrieve a construction worker who fell into a 42-foot hole on the site of the future junior high school at the corner of Monte Carlo Blvd. and FM 75. He was airlifted by PHI air medical helicopter and remains in stable condition. (Michael O’Keefe/First Response Photography)

All hands were on deck Wednesday, Jan. 24 after a 30-year-old male fell into a 40-foot-hole on the future campus of Southard Middle School.

Around 8:09 a.m. the Princeton Fire Department was dispatched to a call at 455 E. Monte Carlo for a male who had fallen approximately 40 feet into a hole. Princeton FD, Lowry Crossing FD and Collin County AMR/EMS responded immediately.

According to information released by Fire Chief Tom Harvey, emergency responders were met at 8:11 a.m. by construction personnel on-site at the future junior high school who indicated a worker, who was part of the authorized construction team with Pogue Construction, had fallen into a 3-feet by 42-feet hole. The hole is for a foundation pier. The patient was conscious and communicating with first responders.

Frisco’s Technical Rescue Team was requested along with McKinney Fire Department as Princeton and Lowry Crossing worked hand in hand with construction representatives to secure the scene, began initial safety measures, and maintain contact with the patient. Frisco’s Technical Rescue Team arrived at 8:52 a.m. and began rescue operations. The victim was safely rescued at 9:19 a.m., stabilized by EMS personnel on scene, and then transported via PHI air medical helicopter to Medical Center Plano at 9:41 a.m. The patient remains in stable condition.

Additional support was provided by the Princeton Police Department and Melissa Fire Department.

“The Princeton Fire Department would like to thank and commend the First Responders who did a superior job in the mitigation of this incident, and also Pogue Construction and Princeton Independent School District for outstanding coordination and control leading to its successful outcome,” Harvey said.

For more information see the Feb. 1 edition of The Princeton Herald.