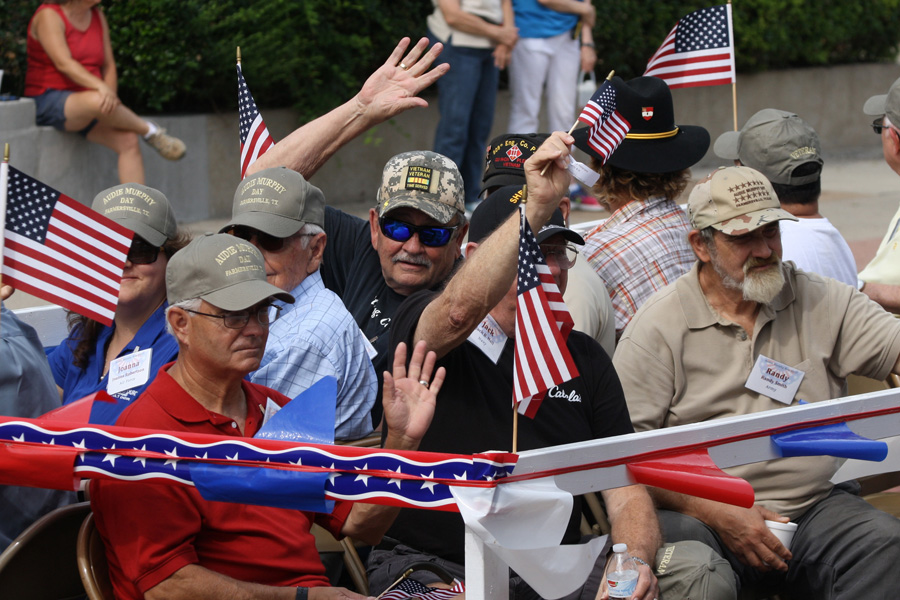 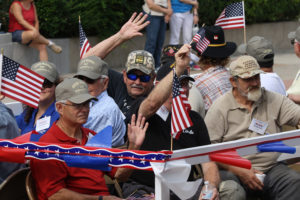 File photo
Local veterans traverse around the square as part of last year’s Audie Murphy Day festivities. The parade will kick off at 10 a.m. Saturday, June 23 followed by a program at the Onion Shed in Farmersville.

Collin County residents are being invited to celebrate veterans and active duty personnel along with the memory of Audie Murphy as annual festivities take place Saturday, June 23.

The 19th annual Audie Murphy Day will be held in downtown Farmersville and features myriad events including a parade, program and a free lunch for veterans and active duty personnel.

The event is hosted by the Farmersville Main Street Program.

“This year’s Audie Murphy Day will be a special one as we celebrate the Farmersville VFW Post’s 50th Anniversary, as well as honor its namesake, Thomas Glenn Caraway,” Main Street Manager Reagan Rothenberger said. ““Tommy”, as he was affectionately known, gave his life in service to our country during the Vietnam War.” He was the only soldier killed in Vietnam from Farmersville.

Audie Murphy Day will celebrate both the memory of Caraway and of the most decorated soldier of World War II, Audie Murphy.

The event will kick off at 7:30 a.m. with registration and free breakfast at First Baptist Church of Farmersville, located at 124 S. Washington Street.

Several exhibits in town will showcase the life of Audie Murphy and the military including the library which will be open from 9 a.m. to 2 p.m. at 203 Orange Street, the historic Bain-Honaker House museum from 10:30 a.m. to 1:30 p.m. at 108 College St. and the Farmersville Heritage Museum from 10 a.m. to 1 p.m. located on Farmersville Parkway.

The parade will kick off downtown at 10 a.m. and veterans will have the opportunity to ride in the parade.

Anyone who would like to participate in the parade, can visit www.farmersvilletx.com and click ‘Audie Murphy Day’ under the Main Street tab. There you can fill out a form and send it in. “We welcome anyone from local groups to individuals to walk in the parade! If you cannot participate, we hope that the community will show up in full force to watch and honor our local veterans,” Rothenberger said.

This year’s program will be held at 10:45 a.m. at the Onion Shed with reserved seating for veterans and active military, a speaker, a roll call of local veterans and a historical remembrance of Audie Murphy.

The event will conclude with a free luncheon for veterans hosted by community volunteers from noon to 1 p.m. at First Baptist Church.