A hug for her hero 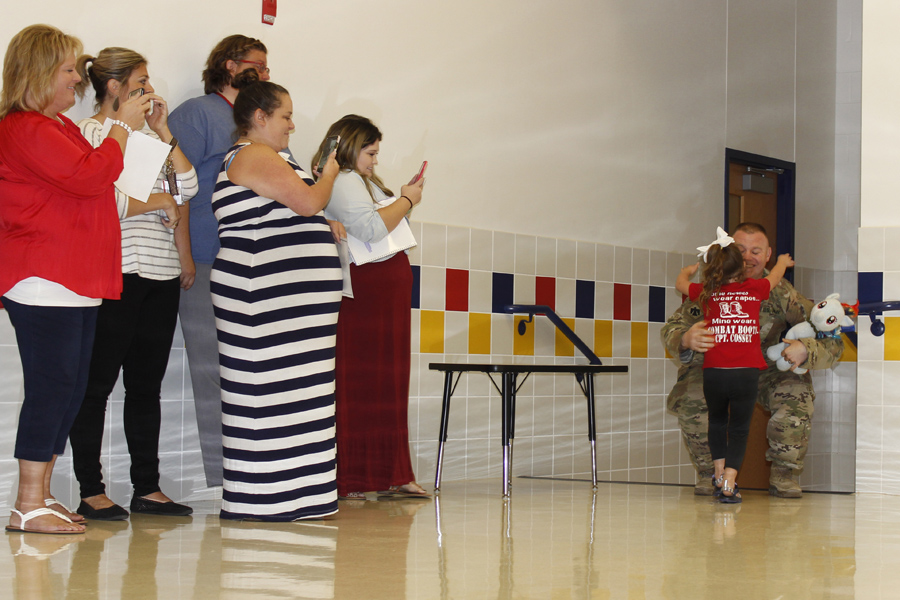 Nora Cossey has been watching soldier homecomings on YouTube, dreaming about the day her own father, Capt. A.J. Cossey, would return from Afghanistan. Wednesday, Sept. 26, the 5-year-old starred in her own video as her father surprised her during the Smith Elementary kindergarten awards ceremony.

“Deployment can be so hard on a kid,” said mom, Marie Cossey, who teaches 4th grade at Smith. “But it’s especially hard when the parents do back-to-back deployments.”

Capt. Cossey, who has had three tours overseas, was most recently stationed in Afghanistan and has also been in Iraq and Ukraine. Most of his contact with Nora and family over the last two years has been through a spotty FaceTime connection.

“I can’t even put into words what today means,” he said, as he waited to see Nora.

Just prior to his most recent deployment, Cossey took Nora to the Build-A-Bear store, where they built two My Little Ponies. As they were leaving the store with the stuffed animals, Nora gave her dad the pony named Rainbow Dash.

“She looked up at him and told him he had to take Rainbow Dash with him to Afghanistan so it would keep him safe and he could come home alive,” recalls Donald McIntyre, who is Nora’s uncle. “It was pretty emotional.”

The reunion has been in the works for several weeks, as the exact date of Capt. Cossey’s return has been classified.

“Nora is always watching YouTube videos of dads coming home, and she always says she wishes her dad could do that,” Marie said. “I mentioned it to her kindergarten teacher, but I didn’t want to interrupt her class. They just took the idea over and came up with a plan. It means so much that her teachers were so involved with it.”

Wednesday morning, Rainbow Dash and Capt. Cossey waited in the choir room at Smith for Nora to be called to the stage to receive the citizenship award from her teacher, Kim Anthony.

As soon as Nora realized her dad was peeking around the corner, she sprinted to him and Rainbow Dash. There was not a dry eye left in the packed Smith cafeteria during the tearful reunion, which was made complete when the rest of the family joined them in the hug.

“I’m just so happy, because she and her dad are super close,” Marie said. “They worked out together. They rode bikes together. He took her to and from school. I’m excited because she gets her best friend back.”