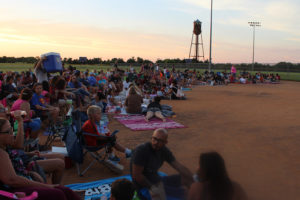 As the sun began to set Wednesday, June 21 and the first day of summer was heralded in, residents began to wander into the J.M. Caldwell Senior Community Park/POW Camp.

And they just kept arriving and arriving.

The first summer Movie in the Park could be declared as a success as more than 500 people gathered to watch the new live-action “Beauty and the Beast” movie.

Presented by the Lois Nelson Public Library Board, volunteers from the library board gave away popcorn and worked the concession stand.

Though they had prepared 400 bags of popcorn, they eventually ran out of the tasty treat.

Moviegoers were welcomed to the event by Police Chief James Waters and Mayor John-Mark Caldwell.

“This is the first of many events such as this that we plan to offer in Princeton,” Caldwell said. “This is what makes us a community.”