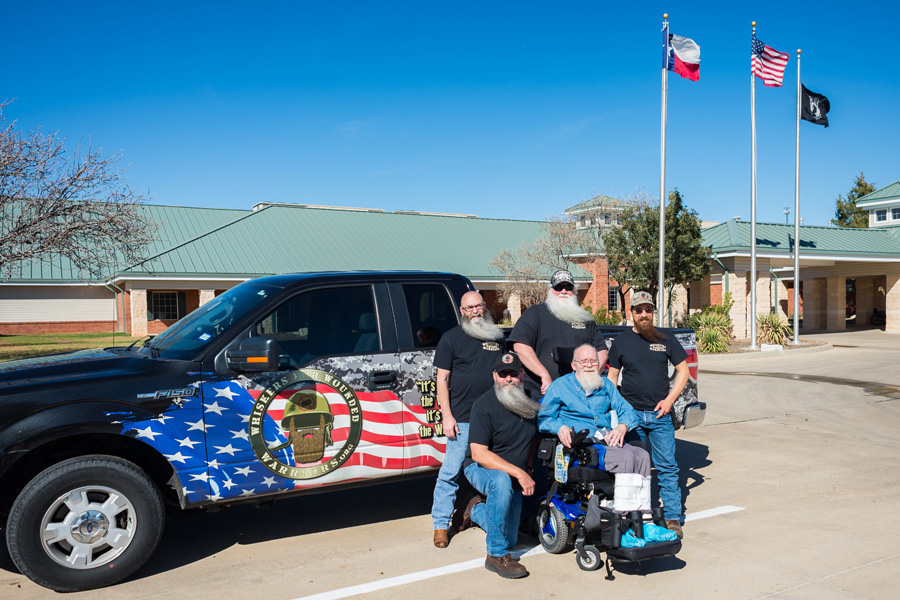 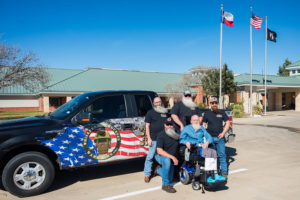 Volunteers from Whiskers for Wounded Warriors visit veterans at the Dallas VA hospital the first Sunday of each month. Mike Wilburn, bottom left, is the group’s founder. Photo courtesy of Justin Shields.

A brigade of bearded men make their way through the hallways of the Dallas VA hospital the first Sunday of each month on a mission. It’s a simple one and a noble one. They want to meet veterans and let them know how much they appreciate their sacrifice and their service.

Looking a bit like a cross between the band ZZ Top and the men of Duck Dynasty, this group, known as Whiskers for Wounded Warriors, have been stepping inside hospital rooms for three years now visiting veterans and their families. These bearded men with big hearts simply greet each patient with dignity and respect telling them “thank you for your service.”

“It blows them away because nobody ever tells them that,” said Mike Wilburn, founder of Whiskers for Wounded Warriors.

Though it took a while to build a rapport with the VA staff and veterans, the group of men who look like “woolly mammoths” or Repo men, as Wilburn says, eventually earn the trust of those they encounter with their big hearts and sincere gratitude.

“They don’t trust us when we walk into a hospital room looking like we do,” Wilburn said.

Though members of the group have never served in the military, they know the value of a veteran and the sacrifice they made for our country. Most veterans at the VA have served in the Korean, Vietnam or Gulf wars though every once in a while they meet a WWII vet, or what Wilburn fondly refers to as the ‘Golden Nugget.’

For the complete story see the July 6 edition of The Princeton Herald or click here for the e-Edition.