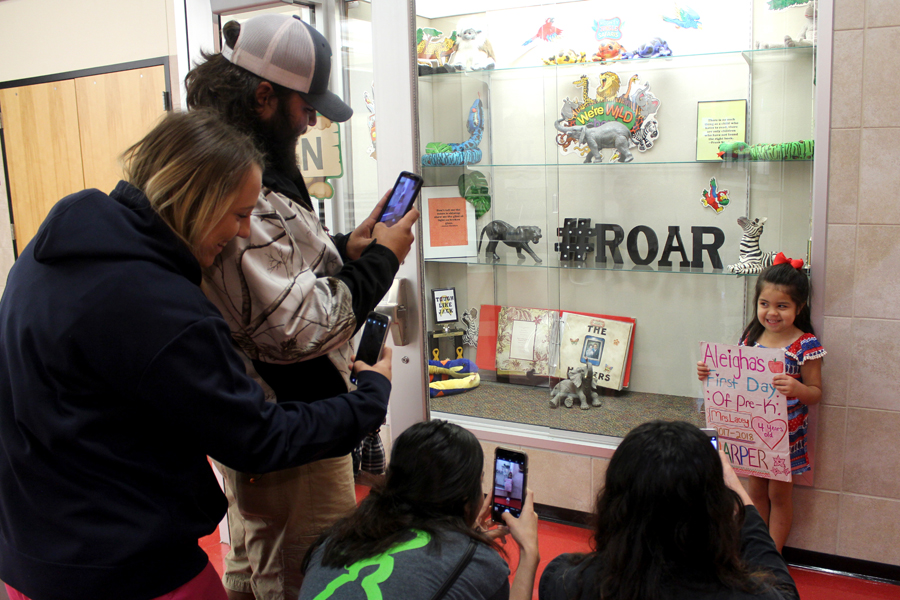 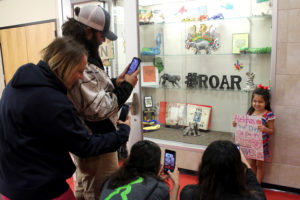 Aleigha Tortorello starts her first day of pre-kindergarten at Harper Elementary School. She is surrounded by her family Caitlin Abbott, Charles Kirkbride, Mimi Tortorello and Cassie Kirkbridge who capture the moment with their own photos. (Wyndi Veigel/The Princeton Herald.)

The kindergarten class was the largest enrollment again this year with 355 reporting Thursday compared to 299 on the first day in 2016. In addition, grades 3rd-6th all reported enrollments of more than 330.

To handle shifts in enrollment numbers, the district has made minor adjustments to accommodate the additional students at various grade levels. On Monday night, the board approved hiring an additional teacher for Pre-K at Godwin Elementary.

“As is customary, we had to shift a few teachers between grade levels and/or campuses to balance the students and teachers,” Superintendent Philip Anthony said. “Smith had the biggest jump in enrollment at the elementary level. We went from 534 students on the first day last year to 614 students Thursday.”

Although Smith is close to capacity, the district was able to hold off on adding portables to the campus this school year.

“With the passing of the recent bond election, a new elementary school and junior high will open in 2019 and will alleviate overcrowding,” Anthony said. “But we can’t promise we won’t need portables prior to construction being completed.”

The district still anticipates the addition of new students in coming weeks.

“It is normal for enrollment to continue to grow steadily until Labor Day,” the superintendent said. “However, this year’s growth is likely to continue throughout the year because Princeton has 200 homes currently in various stages of construction and nearing completion.”

These homes are being built in The Trails at Riverstone and Cypress Bend neighborhoods, which are both zoned for Lacy Elementary.

“Lacy is the campus that will experience the most of this growth,” Anthony said. “But we have additional teachers on staff at Lacy who will be able to handle the increase in students.”