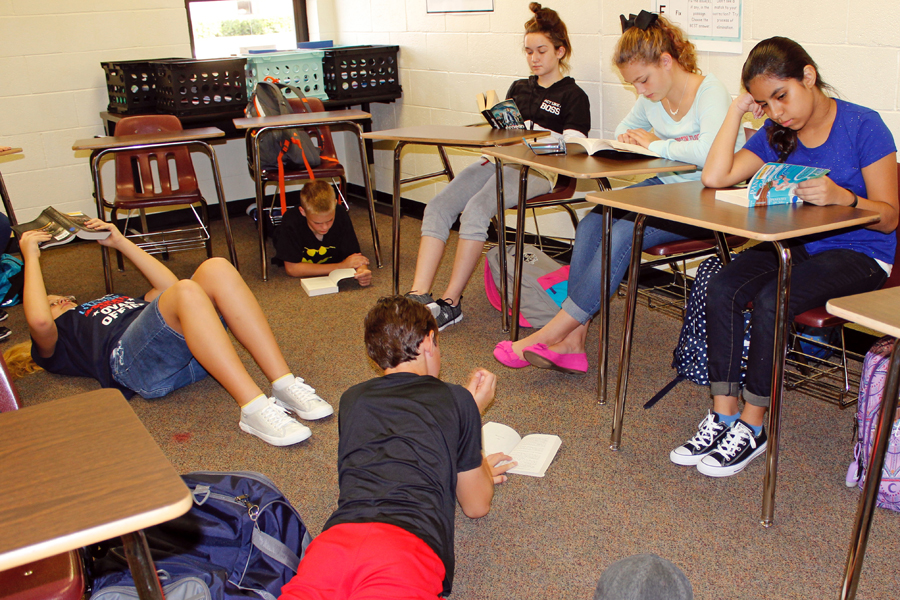 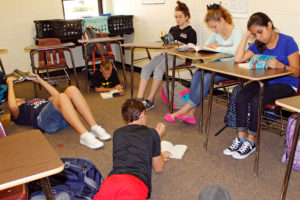 Every language arts classroom at Clark Jr. High is now equipped with a “revolving library” that encourages students to pick up a book and read for pleasure. Principal Casey Gunnels was the inspiration for the idea and provided the department with $1,000 to acquire nine sets of books that rotate between classes after every other six weeks.

According to 7th-grade writing teacher Bailie Avrit, who coordinated the creation of the project and the acquisition efforts, each library has a bit of everything.

“The goal was to have a variety of genres and themes so that students could always find a book that interested them,” Avrit said. “I chose the list based on a few different factors. Each teacher submitted their ‘must haves,’ so those were the first books chosen.”

The libraries include the classics of literature, including “To Kill a Mockingbird,” “Alice in Wonderland,” “The Jungle Book” and “Treasure Island.” There are also a number of popular dystopian novels such as “The Hunger Games” and “Divergent” and the fantasy books, “Eragon” and “Inkspell.” The sports fans aren’t left out because the libraries have books by Mike Lupica.

“I was an avid reader in school, so I sought out books that I enjoyed during my middle school years,” Avrit said. “Before I became a teacher, I also worked at a book store in the young adult section, and I made sure to incorporate books that were constantly flying off the shelves while I worked there.”

“One of the staples of any ELAR classroom is reading, and the libraries allow students to always have a book handy when needed,” she said. “When asked to do silent, sustained reading, they can never say they don’t have a book. These libraries might also contain novels the school library doesn’t have, so they have an opportunity to read other novels that they would not have had access to before.”

According to Avrit, her students are always reading the books in her classroom library and also ask to check them out so they can finish them at home.

“They definitely flock to the new library, which has newer and more interesting titles,” she said. “Since these sets rotate to a new teacher after two six-weeks periods, some are trying to read as many as they can before we pass them along.”