Community invited to ‘Back the Blue’ Friday night 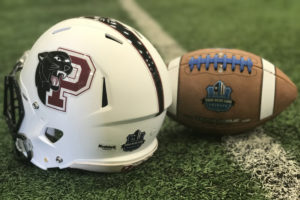 The Princeton Panthers will be honoring police officers in a Back the Blue event Friday night. (Courtesy photo.)

The Princeton Panthers are inviting the community to join them Friday, Sept. 29, as they show their appreciation to law enforcement with the Back the Blue game. In addition to beating the Melissa Cardinals, the coaches hope to bridge the gap between the youth in the community and the officers here to help.

“This is less about politics and more about showing young people that sometimes their views on police officers are not accurate,” head coach Clint Surratt said. “The role of a police officer is to help, and young people need to have positive perceptions of those in authority.”

Coach Surratt said it was an easy decision to implement a “Back the Blue” game into the schedule.

“As a team, we are spending a lot of time on our core values – family, integrity, discipline, compete and pride,” he said. “And all of these symbolize what police officers are all about.”

The theme of the game goes along with an old adage.

“If you follow the theory that it takes a village to raise our children, then you’ll understand that police officers are a huge part of our community, and therefore, do a lot to fulfill this role,” Surratt said. “This entire Back the Blue effort is to show appreciation for what they do.”

As part of the recognition, Princeton Police Chief James Waters will be an honorary captain for the game and will be there for the coin flip.

“We are going to invite Melissa to join us in this effort and see if they would like to invite their chief to be one of their captains,” Surratt said.

In addition, the Panthers plan to show their appreciation in other ways.

A special football has been ordered for the game ball. The Thin Blue Line tribute ball will be raffled off with proceeds donated to the city of Princeton fund to pay for body cameras for local police officers.

“We plan to have a Princeton Police Department squad car parked past the end zone so they can turn on their lights when we score,” Surratt said. “The players also will be wearing a special sticker on their helmets that night to show their support.”

The support won’t just be showing on the field, because special T-shirts were on sale for students to purchase and wear in the student section in the stands.

Any proceeds from the sale of T-shirts will also be donated to benefit law enforcement charities.

“We want the Back the Blue efforts to give police officers the platform they need to be there for the kids,” Coach Surratt said. “And we want to show them they are appreciated for all they do for our community.”