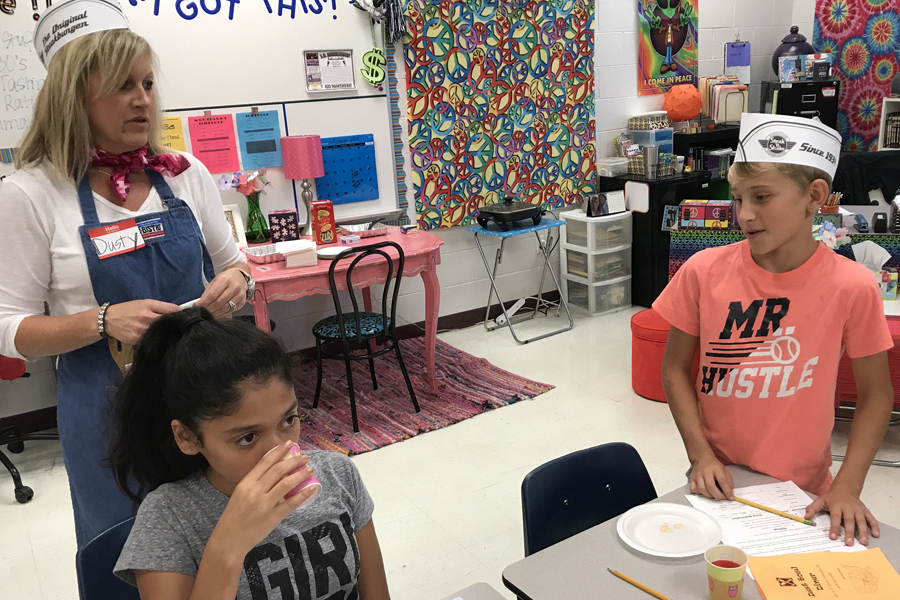 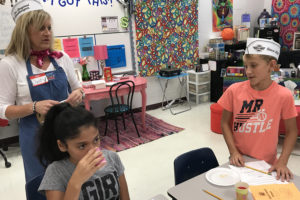 Huddleston language arts teacher Christine Clark showed up for school last week as her alter ego, Dusty, the proprietor and chef of the Dust Bowl Diner. It was her way of delivering the lesson in a way students could understand and remember.

“During the first six weeks, we read a book, ‘Out of the Dust,’ the story of Billie Jo Kelby who lives in the Oklahoma Dust Bowl during the Great Depression,” Clark said. “Throughout the lesson we learn about figurative language, some famous figures from the 1930s and what life was like during this unfortunate time in history.”

To reinforce what they learned, Clark’s classroom became a scene from the 1930s Midwest, when drought conditions and poor farming methods turned the soil into dust that would many times blow like a snowstorm.

“When the students enter the classroom, they are given a menu for the Dust Bowl Diner that contains the food items they will sample,” she said. “Mrs. Clark takes the day off and Miss Dusty, who looks an awful lot like Mrs. Clark with straight hair, stops in to substitute.”

Students then commence with a food tasting session of the goodies, or not so goodies, found in the plains region during the Depression, including crackers and fried Spam.

“Miss Dusty is in charge of making sure the students know how to write a compound sentence, in addition to exposing the students to some of the food choices that were made popular during the 1930s,” Clark said. “Students take a critical look at their food items and rate them using descriptive writing.”

Parents might be surprised to know that a majority of the students were clamoring in line for second helpings when they were called.

“I thought the food was really good,” said 6th-grader Liam Pagano. “This was awesome.”

But Olga Ruiz passed on the chance to get more fried Spam.

To illustrate that refrigeration was not always available and people had to come up with alternative meals, the diner featured ketchup and bread sandwiches.

But the real treat was that Toll House cookies were invented in the 1930s so the Huddleston students were able to sample chocolate chips.

“It is always fun for the students to try and trick Miss Dusty into revealing that she is really Mrs. Clark, and the next day at school the trickery continues,” the teacher said. “Mrs. Clark is back at school and insists she had a wonderful day off and hopes that the students enjoyed their historic substitute.”