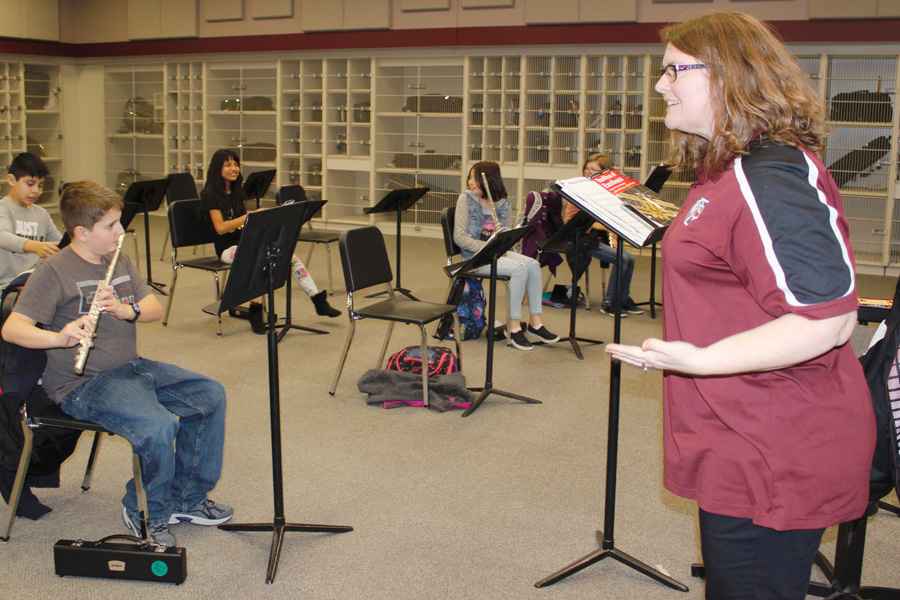 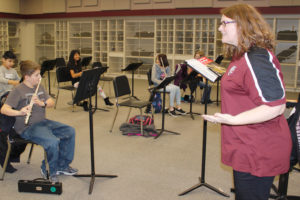 The McClures know a little something about the sound of music. It’s not just a movie, it’s their way of life.

Three out of the four in the McClure family currently work in some aspect of music for Princeton ISD. Bob is the audio/video instructor and has a music business on the side, while Melissa teaches band. The newest addition to Princeton ISD is their daughter, Kristen, who is a music teacher at Harper.

They all have the same basic philosophy when it comes to music.

“Music is a universal language,” Kristen said. “It doesn’t matter where you come from or what language you speak, music can reach everyone in some way.”

Bob agreed, and added, “I think music is special, because it touches us on so many levels. Not only is music heard, it’s also felt when experienced live. It appeals to our emotions and is embedded into our very DNA.”

It was music, not cupid, that brought Bob and Melissa together.

“I was offered a full scholarship to attend Henderson State University because of my All-State band placement in high school,” Bob said. “Melissa was also attending Henderson for the first time, and we met at band camp the summer before our freshman year of college.”

From this match made in band class, a musical family was born.

“They had me while still in school, so I basically grew up on the campus,” Kristen said. “Every summer I went to band camp and stayed in the dorms with my mom. When I was in 6th grade, the college band director, David Rollins, told me that if I practiced really hard and was a good student, he would give me a band scholarship to come to Henderson. Ever since then I was hooked.”

All three McClure teachers got their education at Henderson. Now, the fourth McClure, Josh, who graduated from PHS in 2017, attends Henderson where he’s pursuing a music education degree.

“When we got married, I changed my major because I was concerned that with both of us being band directors, we wouldn’t be able to be good parents,” Melissa said. “I was miserable in my elementary education classes, because I missed band and choir, and I couldn’t imagine my life without music. Mr. McClure told me to pursue music since that was what I wanted more than anything. So our kids grew up being drug behind the band truck, but I was a lot happier, and hopefully, that made their childhood happier as well.”

It was this kind of upbringing that influenced the entire McClure clan.

“Growing up I can remember all the songs my mom would sing to me, and my grandparents would sing lots of hymns,” Kristen said. “I’ve been singing since I can remember, and it’s always been something comforting.”

And although Melissa grew up surrounded by ag, jocks and cheerleaders, she got the same support from her family when she expressed her interest in music.

“My love of music started as a little girl singing in church,” she said. “My mom would sing to me, and with me all the time, and I started singing solos at church when I was 3 years old. Neither of my parents or my siblings were in band, so they weren’t really sure about it. This band thing was completely foreign to them, but they saw how much I was interested, and they got me a clarinet and jumped on board the band wagon.”

The McClures’ love for music, almost any style, is a passion that drives them personally and professionally.

“I love teaching a subject that the students themselves love,” Bob said. “Seeing that passion ignite that will last for their entire lives is something that keeps you going. Teaching music, in particular band, is an all-consuming profession. Pretty much all of your time is invested in the program and the students.”

The music education profession does have its challenges.

“Sometimes it was hard with my parents always being busy from band,” Kristen said. “I didn’t want to have a job that kept me away a lot. Turns out it’s what I needed in my life, and I wouldn’t have it any other way.”

And you can’t forget those pesky clarinets.

“I would say teaching 6th grade clarinets is the hardest,” Kristen said. “Strangely enough, that is my mom’s specialty, but I am horrible at it. There are so many buttons to push, lots of extra parts on the instrument to deal with, and I’m just horrible at playing the thing.”

Bob summed up the experience of teaching in the music field alongside his family best.

“It has been interesting,” Bob said. “I think rewarding is the best way to describe it. Not only did my daughter choose to follow in her parents’ footsteps, but she chose to do so in the very district where she learned the very thing she teaches. When my son chose to pursue music as well, it was almost surreal. It was never something that we planned, but it’s special, to say the least.”