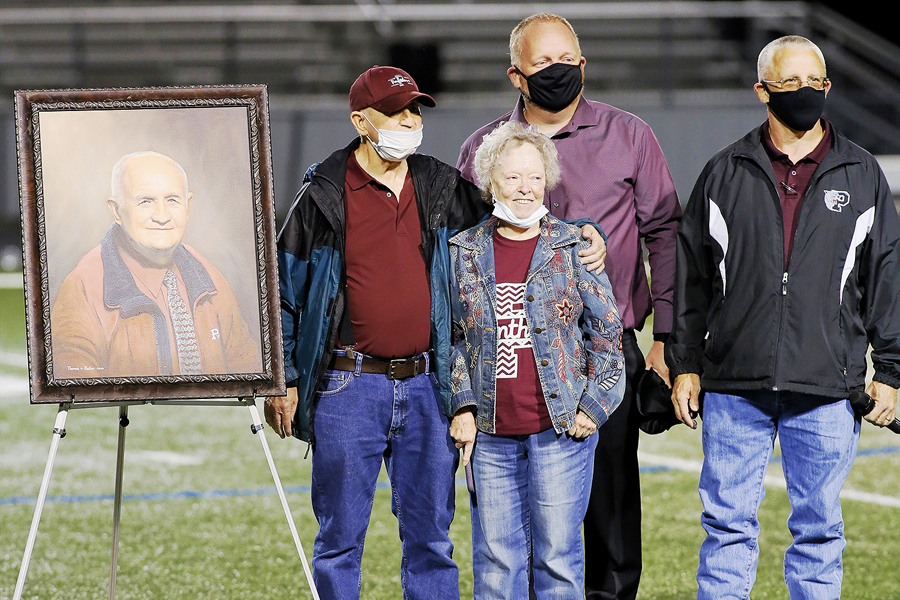 Princeton ISD honored former football coach Jackie Hendricks Friday, Oct. 2 with the unveiling of his portrait to hang in the press box at the stadium.

In 1974, Coach Jackie Hen­dricks led Princeton to the state semifinals after the Pan­thers won this region. To this day, that football achievement stands as the most successful playoff run in Princeton history. To recognize Jackie Hendricks and his longtime Princeton coaching career, he was hon­ored in 2009 when the stadium was dedicated in his name.

At the Friday, Oct. 2 foot­ball game, PISD again honored Coach Hendricks with the un­veiling of his portrait to hang in the press box at the stadium. Jackie arrived in Princeton in 1968 at began coaching and teaching biology. Over the next three decades, he served this community as not only a coach and teacher, but as a principal and athletic director, before retiring in the year 2000. Coach Hendricks had an un­wavering dedication to the stu­dents and football players of Princeton ISD, and to this day, he rarely misses a Princeton Panther football game in the sta­dium. In fact, he was at one of the very first practices ever held at Jackie Hendricks Stadium. Coach Hendricks came to watch one of the first practices after the stadium was named in his honor.

As he was there watching the players work out, a young, brand new coach went over to him and said, “I’m sor­ry, sir, but you need to leave. Our practices are closed.” That’s when Coach Hendricks looked around at the name freshly installed on the top of the new press box and said, “Hmmm, I’ve never been kicked out of a stadium with my name on it.