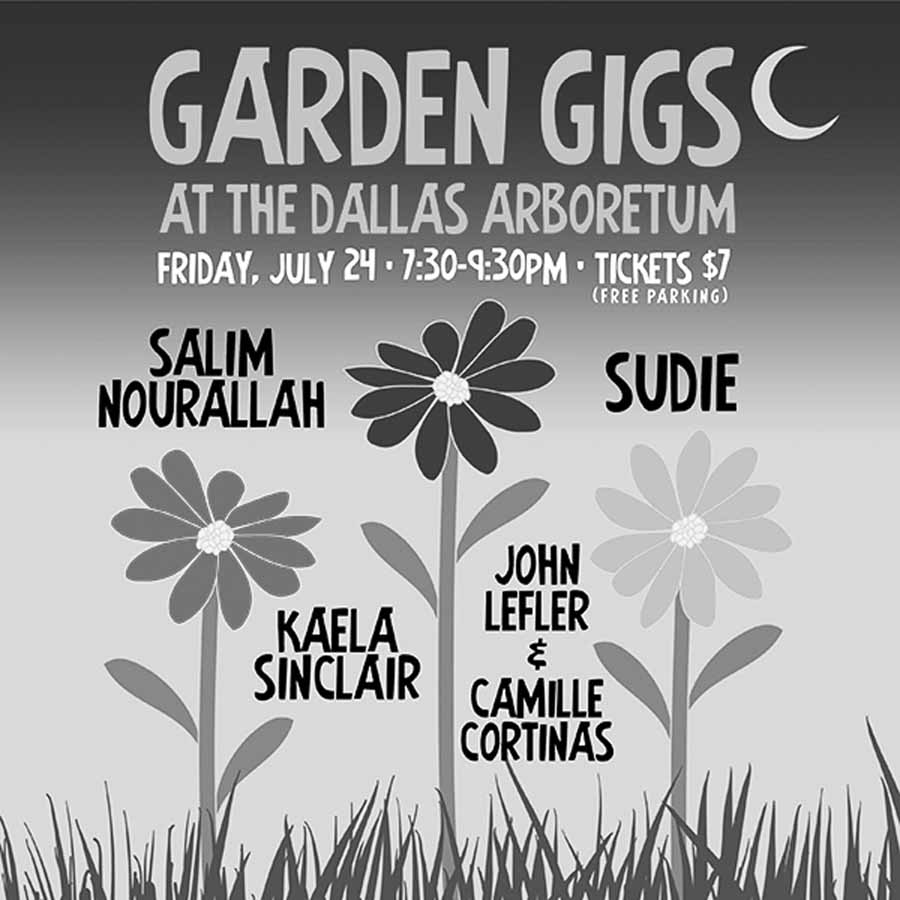 For the first time ever, the Dallas Arboretum hosts a full-grounds musical event open to the general public on Friday, July 24 from 7:30 p.m. to 9:30 p.m. Local artists/musicians Salim Nourallah, Duo of John Lefler and Camille Cortinas, Kaela Sinclair and Sudie perform intimate sets at sundown throughout the gardens. Guests can purchase dinner and snacks from popular DFW food trucks or bring their own picnics and beverages. Tickets are available for $7 per person with parking included at http://www.dallasarboretum.org/visit/seasonal-festivals-events/garden-gigs

Salim Nourallah is a North Texas music scene fixture. After gaining initial acclaim with the Denton-based Nourallah Brothers, he’s gone on to release a half dozen solo albums and produce a fine list of many others. Nourallah is known for his Beatle-esque sound and his timeless approach.

John Lefler is a Texas-based artist that has an extensive musical resume to say the least. As the guitarist for Dashboard Confessional, he has toured nationally for the past decade alongside an impressive solo career of his own. Camille Cortinas has released two albums, “Fishing For Comets” and her solo debut, “Taken Apart.” She is the voice of Lotto Texas’ “This is My Lucky Day” commercial as well as a Hot Pockets jingle. The two talents combined are sure to deliver a standout performance.

After the release of her debut album, “Sun & Mirror,” Kaela Sinclair gathered a bevy of rave reviews and radio play. For a new girl on the scene, she has already captured an eager and growing fan base. In collaboration with acclaimed producer and drummer, McKenzie Smith (Midlake, Regina Spektor, St. Vincent), the 24-year-old from Denton has showcased her compositional skill, lush vocals, and intelligent lyrics and proven herself to be as sultry and expressive on stage as she is in the studio.

Sudie is a 23-year-old singer, songwriter and musician who describes her sound as “something jazzy meets kind of crazy… if Bjork had arranged something for Ella Fitzgerald or Billie Holiday to sing over.” It’s a sound she’s crafted all by herself.

Bill Graue, Dallas Arboretum board chairman, said, “The Dallas Arboretum is the perfect place for music outdoors. With locals and visitors looking for things to do in Dallas, we invite everyone to join us at Garden Gigs to hear these talented up-and-coming musicians.”

Food Trucks include the following:

The Dallas Arboretum and Botanical Garden is located on the southeastern shore of White Rock Lake at 8525 Garland Road, Dallas, Texas 75218.