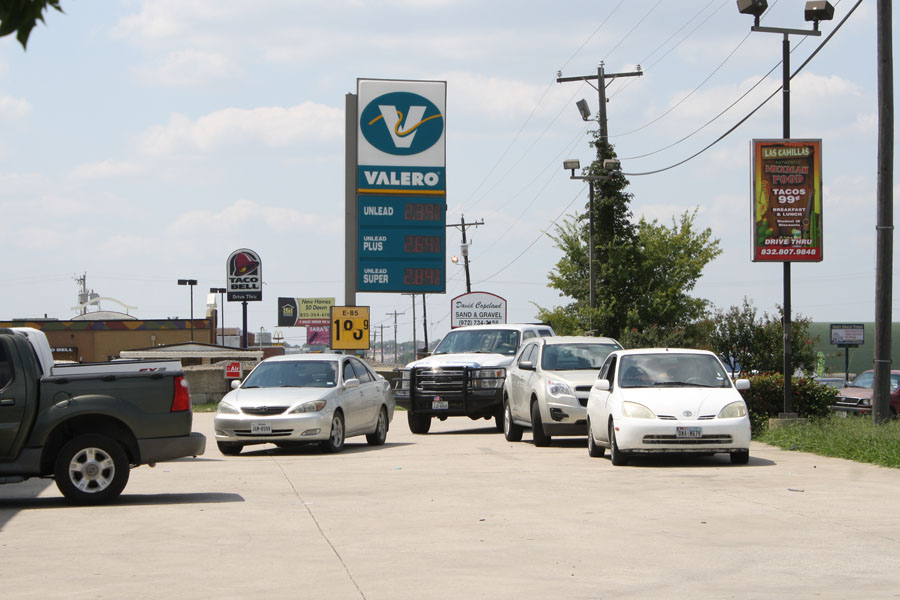 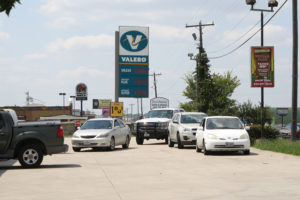 Residents wait in line due to a fuel shortage at the Appletree Food Mart – Valero – on Hwy. 380. Though fuel is taking longer than normal to arrive in the DFW metroplex distributors state that there is not a fuel outage and the shortage will only last approximately one week. (David Jenkins/The Princeton Herald.)

In a throwback to the Arab Oil Embargo in 1974, lines are forming at gas stations as motorists top off their tanks and fuel distributors are running out of the commodity.

Gas retailers throughout Princeton and around North Texas started experiencing shortages Wednesday in the aftermath of Hurricane Harvey that caused the closure of refineries along the Texas Gulf Coast.

Allsups, located on the corner of FM 982 and Hwy. 380, has been experiencing long lines of people waiting to fill up with gas.

“We’ve had lines all day and it’s going to be all day until we run out of gas,” Amy S., a cashier at the store said. The store received a fuel delivery Thursday morning.

Currently, Allsups fuel is $2.59 a gallon for regular unleaded.

Cars forming the lines impacted traffic along both roads and those attempting to go to McDonald’s, which sits next door to the gas station.

According to the police department, there have been no fuel related problems other than lines impacting traffic along roadways.

North End Grocery, located at 400 McKinney Ave., ran out of fuel at noon Thursday. However, according to Manager Nick Patel, they are expecting to receive a fuel shipment Thursday night.

The newly-opened 7/11 in Princeton, located at 700 W. Princeton Drive, ran out of gas at 2 p.m. Thursday though they still have diesel fuel according to cashiers at the store.

There are lines down Hwy. 380 from the establishment that are also impacting drivers along the road.

To ease everyone’s nerves, Douglass Distributing issued a statement including the following information:

“We want everyone to know that we still have access to plenty of fuel – the lines that our delivery trucks are waiting in are just much longer because of the refinery shut down. There is no outage. There is fuel. Each delivery is just taking longer right now. We want to assure everyone that we have all of our delivery trucks out running 24 hours resupplying our local communities in Northeast Texas and South Eastern Oklahoma.”

The distributor is encouraging citizens to make fuel purchases as they normally would.

“If the community reacts that way then we cause an outage at an individual location,” the statement said. “We do not expect the shortage to last any longer than one week.”

“While some refineries have shut down or are operating at reduced capacity due to Hurricane Harvey, plenty of refining capacity is still online and we have more than 230 million barrels of gasoline supply in Texas to meet needs,” Railroad Commissioner Ryan Sitton released in a statement. “Citizens have no need to fear shortages even though prices could climb during the next few weeks until all refining capacity is back online.”