Costumes on parade for junior high 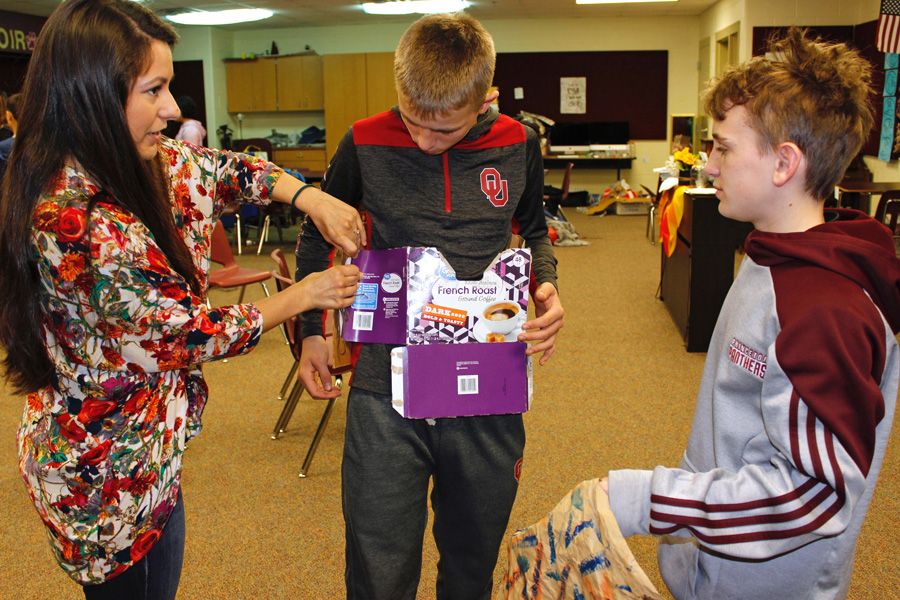 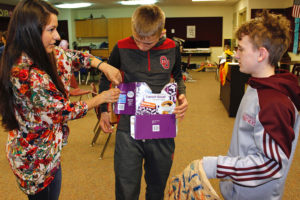 Clark Junior High students got to experience an impromptu fashion show recently when theater students showed up to class during a costume parade to model their creations.

Clark theater teacher, Gabrielle Lamothe, came up with the theater tech idea to teach costume design to her students.

“I attended an art show over the summer, and one of the exhibits had students modeling costumes made from recycled materials,” Lamothe said. “They looked amazing, and I realized I could teach basic costume techniques through sewing and making measurements out of materials my students already had at home.”

The project came with a few challenges for the students.

“The hardest part for the students was trying to visualize how to use ‘trash’ to make a full costume,” Mrs. Lamothe said. “They had to dig deeper creatively, using their imaginations and researching other costumes made out of the materials they brought in to get them started. Once they began the project, it became easier to continue to put the whole costume together piece by piece.”

After creative problem solving, the students embraced the assignment.

“Many students loved and enjoyed this project,” Lamothe said. “It gave them a break from performance theater and allowed them to use more of their artistic side. I even had groups of students mention they would love to do this project again.”

According to Lamothe, the students’ creativity led to some very unique costumes. Each class had a few standout creations, including an elaborate ball gown, an angel and a mermaid.

The dress was made from a paper grocery bag as the bodice, plastic grocery bags to make the dress puffy underneath and then rolled up printer paper to finish the long skirt. The angel was created out of paper towels, boxes, coffee filters and lots of hot glue.

“We decided to create a mermaid man because we thought it was a good idea after we saw Mrs. Lamothe’s examples and knew what material we had,” said 7th-grader Kyla Price. “Once we put it together, we knew we needed to paint it to make it stand out.”

As a finishing touch, this 4th-period group made fish out of water bottles to surround their mermaid, which joined a super hero and a robot, just to name a few.

The students had to sketch their ideas on paper before they took shape. They also watched YouTube tutorials to decide how to put together their materials, including whether to use hot glue, string or tape.

“The highlight for me was seeing students have that aha moment as they put their costume together one piece at a time,” Mrs. Lamothe said. “Some students enjoyed it so much they took the materials home to work on it outside of class.”

For the complete story see the March 15 or subscribe online.