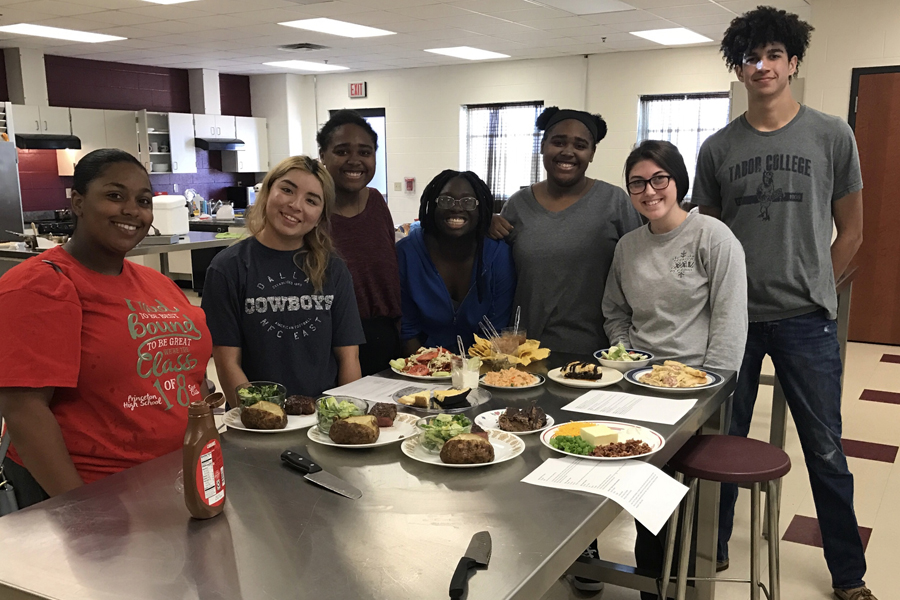 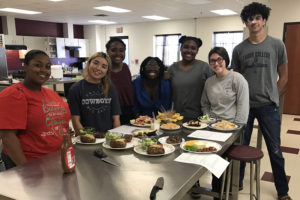 There were too many cooks in the kitchen as the culinary arts program at Princeton High School conducted its annual cook-off for scholarships. And, not only that, they were all great chefs as the “celebrity” judges had a difficult time choosing the winner of the award.

Seven seniors in the advanced culinary class used their skills to create food masterpieces in hopes of winning this year’s scholarships, which the students helped fund through Cafe Fresh.

The prizes will be awarded during the senior awards night ceremony May 9.

Judges were faced with the daunting task of tasting all the menu items, which included such entrees as Cajun chicken pasta, New York strip, lemon garlic salmon, handmade enchiladas and honey garlic shrimp.

Teacher Crystal Telles came up with the idea for the cook-off as a way to award scholarships to one the Café Fresh advanced culinary students.

“When the cafe started making a profit, we had money left over at the end of the year, so I thought it would be a good idea to reward the kids for all their hard work and help them further their education,” Telles said. “Every year there are several students who plan to specialize in culinary after they graduate, and even the students who are just learning how to cook as a hobby are eligible to apply for the scholarship.”

This year there were more students vying for the title of “top chef,” including Abbie Bullard, Montavia Kinney, Elijah Gerber, Joy Garcia, Corde Jackson, Sky Johnson and Lonnie Johnson. They were solely responsible for their own contest meal, from the menu choices and ingredient selection to preparation and presentation.

In addition to the hands-on aspect of the cook-off, the students were required to provide the rationale behind their menu.

“I chose triple chocolate cheesecake because my granny is the main person who taught me how to cook when I was in the 7th grade,” said Elijah Gerber, who also hauled in his own grill to cook his New York strips. “I spent two weeks at my grandparent’s house for ‘cooking camp,’ and this is my favorite dessert that she can make. It gives me a nice, warm feeling on the inside every time I take a bite.”

Several students had sentimental reasons for choosing their recipes this year.

“When I was younger, my grandpa used to make Cajun chicken and sausage pasta every time the whole family would go to my grandparent’s house, but when he passed away, no one would make it anymore,” said Abbie Bullard. “My grandpa would always include garlic and butter breadsticks when he served pasta, and he would let all his grandchildren help him make them. I learned how to make caramel cheesecake from my grandmother’s sister, and this was my grandpa’s favorite dessert before he passed away. So I decided to honor him by making the things he loved.”

One student’s menu was all about the taste of the south.

“The reason for choosing this recipe is I love southern food, and fried pork chops are some of my favorites,” said Corde Jackson. “Sweet potatoes are southern at its best, and peach cobbler is a southern staple.”

Outside judges were brought in to feast on the spread while ranking each entry in regards to taste, texture, variety and appearance.

“I think it’s incredible to see results of their hard work all year,” said assistant principal Clint Sadler, who has helped judge the contest the last two years. “It’s impressive that these kids are capable of creating these meals from scratch.”

CATE director Greg Tabor was invited to judge this year as a last-minute fill-in for longtime judge Jason Brown, who was home with an ankle injury the day of the contest.

“I’m hoping I get invited back next year,” Tabor said. “The food was great. I tried to judge as if I was Guy Fieri, so they would think I was qualified enough. Now I just need his wild hair.”