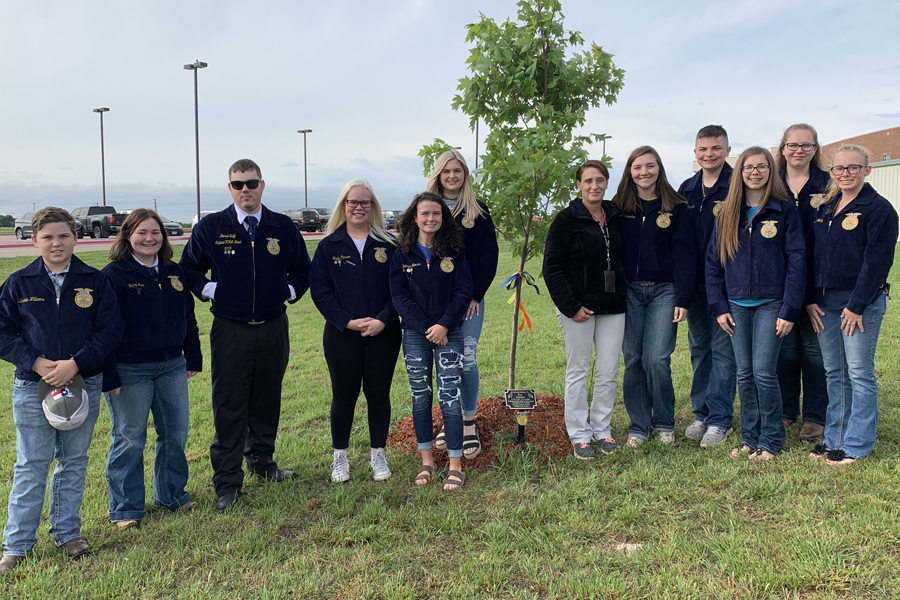 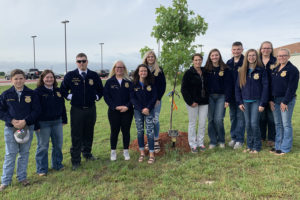 FFA and choir students recently gathered to honor the memory of beloved, longtime ag teacher Tim Johnson by planting a memorial tree near the greenhouse at PHS.

The idea was sparked last semester after the choir dedicated the winter concert to Mr. Johnson, who passed away in September after battling a liver disease.

Kendall Carpenter and Erica Hunt, who were both involved with choir and FFA, said they wanted to do something to keep Mr. Johnson’s memory alive at PHS.

“We wanted to do some type of memorial,” Kendall said. “And a tree symbolizes life, and we know Mr. Johnson will live on in our hearts and lives forever.”

They decided to plant the red maple tree in the grassy area across from the vocational ag building adjacent to the greenhouse where it could be seen by his ag students and where Mr. Johnson spent a lot of his time with the horticulture and plant and soil classes.

Earlier in the school year, the choir students sold baked goods to raise money for the red maple tree and commemorative plaque.

Once everything arrived, the ag students got busy digging the hole and welding a stake to display the plaque.

“It was nice to see the three departments work together to get this done,” choir director Rachel Lavender said.

At the ceremony, students tied colored ribbons around the tree, orange for Mr. Johnson’s beloved alma mater, Oklahoma State University, and blue and gold to represent the FFA organization that meant so much to Mr. Johnson.

“He just meant a lot to all of us,” said Jaica Evans as she tied the orange ribbon around the trunk.

The students invited Mr. Johnson’s widow, Brynn Johnson, to be part of the ceremony.

“The outpouring really shows me how much Tim meant to these students and the school district,” said Brynn. “And I just want to say thank you for everything they have done.”