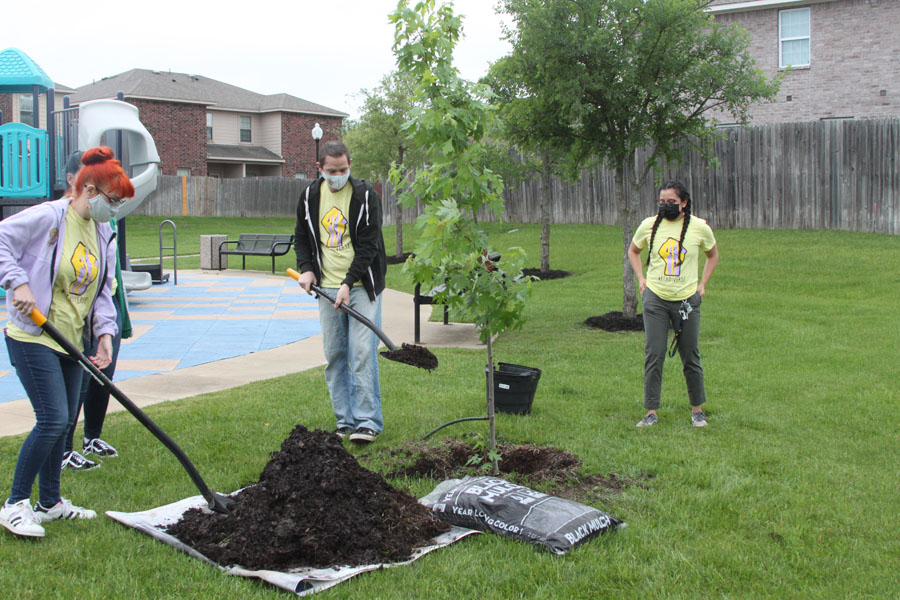 Local nonprofit group, Princeton Tx Diverse, op­erated by John and Brandy Kusterbeck and Charlise Lee, planted a tree for the city and community members to en­joy in honor of Arbor Day at Parkview Heights Park.

The small planting ceremo­ny, consisting of members of the nonprofit as well as a crew from the Princeton Parks and Recreation department was held Friday, April 22.

The group named the tree, an autumn blaze red maple, Nancy, after Princeton Tx Di­verse member Nancy Millan-Dougherty, who John credited with the idea to plant the tree for the city.

Millan-Dougherty, who has been a member of the group since its inception, said she wanted to plant the tree be­cause of Arbor Day, but also as a reminder of the Princeton Tx Diverse group.

The Princeton native said the tree is a symbol of the city’s growth and diversity.

“Every time we see it, we know that, during this time, Princeton is going through so much growth,” she said. “Princeton Tx Diverse has been a breath of fresh air for people who are new to the city and people who are diverse.”

Group members Kim Winn and Christy Wallace selected the tree, which was purchased from Homegrown Plants in Farmersville.

Mayor Brianna Chacon said, “We are so grateful and thankful for the donation made by Princeton Tx Diverse of the beautiful tree to the city.”

In preparation to plant the tree, Chacon said the Parks and Recreation department prepared a place for the tree at Parkview Heights Parks.

“The thoughtfulness and desire to help this city and plant a tree on Arbor Day is commendable,” Chacon said. “I’d love to see future events by them and other groups. We are better together.”

Arbor Day has its roots in 1500s Europe, but the modern practices began in the early 1800s. The first American Ar­bor Day was held in Nebraska in 1872.

The newly planted tree can be found at Parkview Heights Park located at the corner of College Avenue and Dye Bou­levard.

The group is also involved in a monthly food drive on the first Saturday of every month.