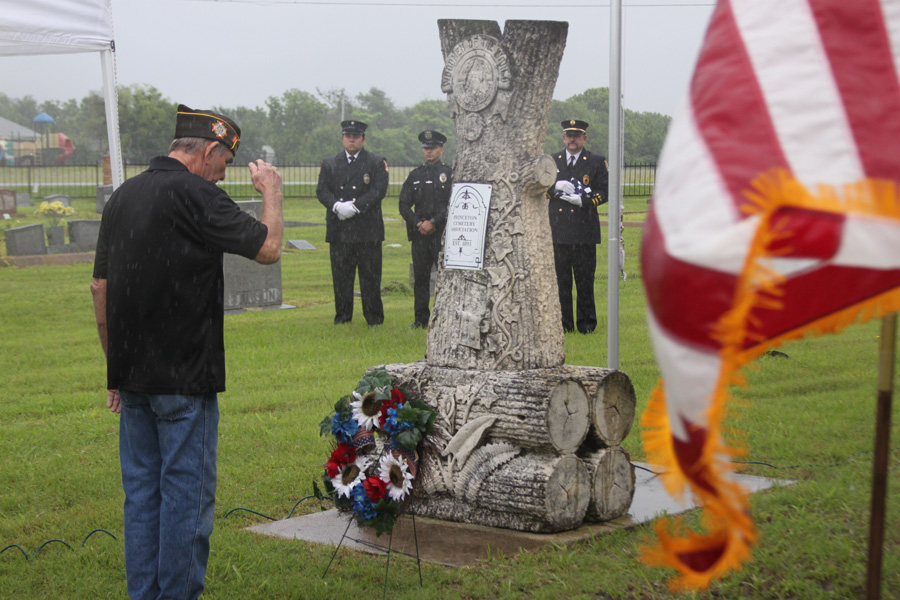 Memorial Day ceremony honors those that gave their all

Heavy rain didn’t stop the Veterans of Foreign Wars Post 9167, Princeton Police Depart­ment and Princeton Fire-Res­cue from honoring the men and women who have given their life in service to our country at a Memorial Day ceremony.

Mayor Brianna Chacon gave the opening remarks at the May 31 ceremony.

“Today we honor our fallen brothers and sisters,” Chacon said. “We honor those who made the greatest sacrifice for us all.”

Chacon quoted John 15:13 reciting, “There is no greater love than to lay your life down for your friend.”

The mayor spoke about the divide many Americans feel, but said those feelings should be set aside in order to remem­ber those who have made the ultimate sacrifice.

The invocation was given by Pastor Mark Hooks, who serves as the fire chaplain for the Branch Volunteer Fire Depart­ment and Princeton Fire-Res­cue. Hooks is also the pastor of First Baptist Church in Branch.

Hooks said that the many freedoms Americans are guar­anteed through the constitution, do not come without a price.

For the full story, see the June 3 issue or subscribe online.